The Institute of Archaeology is a scientific institution with activities that cover all periods, from Prehistory to the early modern period. In the year of the 60th anniversary of founding celebration and as a part of the European Archaeology Days, join us in entertainment contents for children and visit 3 educational archaeological trails of the island of Rab as part of the Rab Archaeological (T)races project.

The project Rab Archaeological (T)races was developed on the idea of an open-air museum, presenting about 30 archaeological sites belonging to all periods on the island of Rab. Included sites spread along the western part of the island and can be visited through three educational trails which lead to the sites or to panoramic locations overlooking archaeological zones. The trails Capo Fronte, Frux and Epario are located on the Kalifront peninsula, the Fruga plateau and Lopar peninsula, stretching through unattached nature which hides not only archaeological sites but also numerous ethnological and natural treasures.

In occasion of the European Archaeology Days and through a collaboration of the Institute of Archaeology, Lopar Culture Centre, Pučko otvoreno učilište Rab, Lopar and Rab Tourism Boards and the Hiking club Kamenjak, a guided tour along Capo Fronte trail will be held. The trail will lead us to numerous attractions and traces of past life on the island, today hidden within the shadows of an unique holm oak forest.

(Meeting location: Kalifront, at the crossroad for Gožinka bay at 8 AM. Participation should be announced by email or SMS till 16.6. at: [javascript protected email address] or 099/814-0712. Appropriate clothing, shoes and sun protection are recommended. All participants should bring sufficient water. The tour duration is half day, and refreshment for participants will be organised).

The project Rab Archaeological (T)races was developed on the idea of an open-air museum, presenting about 30 archaeological sites belonging to all periods on the island of Rab. Included sites spread along the western part of the island and can be visited through three educational trails which lead to the sites or to panoramic locations overlooking archaeological zones. In order to facilitate navigation, but also as an added content, a mobile app was developed which follows the trails and allow access to various augmented reality contents.

The app can be downloaded here: https://rabarchaeologicaltraces.com/download-the-app/?lang=en

"Legio VI Herculia" is a project of living history and popularization of science, primarily archaeology and history, launched in 2020 in cooperation with the Institute of Archeology and Guardians of Zagreb. The short film will show members of the Tenth Cohort of the Sixth Legion Herculia founded in the end of the 3th century, in Croatian historical area, during the reign of Emperor Diocletian. The seat of the prefect of the Sixth legion was in Teutoburgium, today's Dalj in Croatia. The Sixth legion is mentioned in the historical document Notitia Dignitatum and is attested by the legion's seals on bricks and tiles most probably made in Dalj. It is this legion dedicated to Hercules together with the Fifth legion Iovia dedicated to Jupiter that was levyed by Emperor Diocletian himself, one of the most important Roman emperors of late antiquity.

Institute of Archeology, Zagreb in cooperation with the Women's General Gymnasium of the Society of the Sisters of Charity (ŽOG), Zagreb

Topic 1: Interactive map of the Danube Limes in Croatia

On the thinglink platform, we are developing digital educational content of the Roman military camp and the Danube Limes topics.

Workshops consist of an introductory description of the military camp / Danube Limes, which is followed by an interactive platform with which it will be possible to learn more about parts of the camp or the sites on the Limes. Each link with a short description takes us to another activity - a crossword puzzle, memory, information about the local attraction (Kopački rit, for example).

Topics related to the Roman army intertwine all five domains that are determined by the new Curriculum for History (society, economy, science and technology, politics and the philosophical-religious-cultural field). These topics are an ideal basis for finding new knowledge and establishing existing one about the ancient world and society in general. The Roman Limes, with special reference to the Danube Limes in Croatia, describes even closer presence of Ancient Rome in the parts of our country. It brings to life Roman life and the struggle for the maintenance and not only the maintenance of the once powerful Roman Empire in "our beautiful country".

The workshops are conducted as part of the Science Popularization Program of the Institute of Archaeology and the installation project Life on the Roman road - communications, trade and identities on Roman roads in Croatia from the 1st to the 8th century LRR (UIP-05-2017-9768) founded by the Croatian Science Foundation.

Interactive map of the Danube Limes in Croatia

For older children and adults.

Interactive plan of the Roman military camp
Interactive map of the Danube Limes in Croatia
.

ROMAN FOOD IN THE SCHOOL KITCHEN

The Institute of Archeology and the General Gymnasium Družbe sestara Milosrdnica present a fragrant and edible Roman food project in the school kitchen. The students translated recipes from Apicius’ cookbook De re coquinaria and tried to adapt them to the 21st century.

Switching a recipe from a Latin text to lunch for today is no easy task. Recipes from the Roman period have been preserved for us by many authors. The most famous is Apicius (Marcus Gavius Apicius) and his cook (De re coquinaria). His book is the only complete cookbook of the Roman era. But for some it is a big problem that he did not give measures in the dishes but only lists of ingredients. To cook by Apicius, you must have an instilled sense of taste and cook the dish so that it is delicious today, and that contains what is characteristic of Rome.

Due to their precision and extremely beautiful descriptions of various cakes and bread, they used Cato and his work dedicated to agriculture (De agricultura, Marco Porcius Cato Censorius, 234 - 149 BC).

This workshop was designed as part of the popularization of science project of the Institute of Archaeology and the E-twin project Gastronomic Time Machine, which is carried out by the General Gymnasium Družbe sestara Milosrdnica

In the Neolithic (Late Stone Age) only stone and bone tools were used as well as bone ornaments. Houses were made of wood, wattle and doub and were most likely covered with reed or branches. Pottery vessels of various shapes, sizes and decoration were used in the houses, and fabric was made on looms (spindle whorls or loom weights were found). If the settlements were near rivers or lakes, fishing equipment was used.

Connect the objects with the house in the drawing.

Become an archaeologist too, colour the past and discover what some mysterious objects were used for!

The colouring book contains drawings of archaeological objects intended for colouring and / or supplementing the drawings.

The objects are accompanied by a short educational text. The purpose of this colouring book is of an educational nature and the desire is to stimulate creativity and imagination!

Print and colour the past! 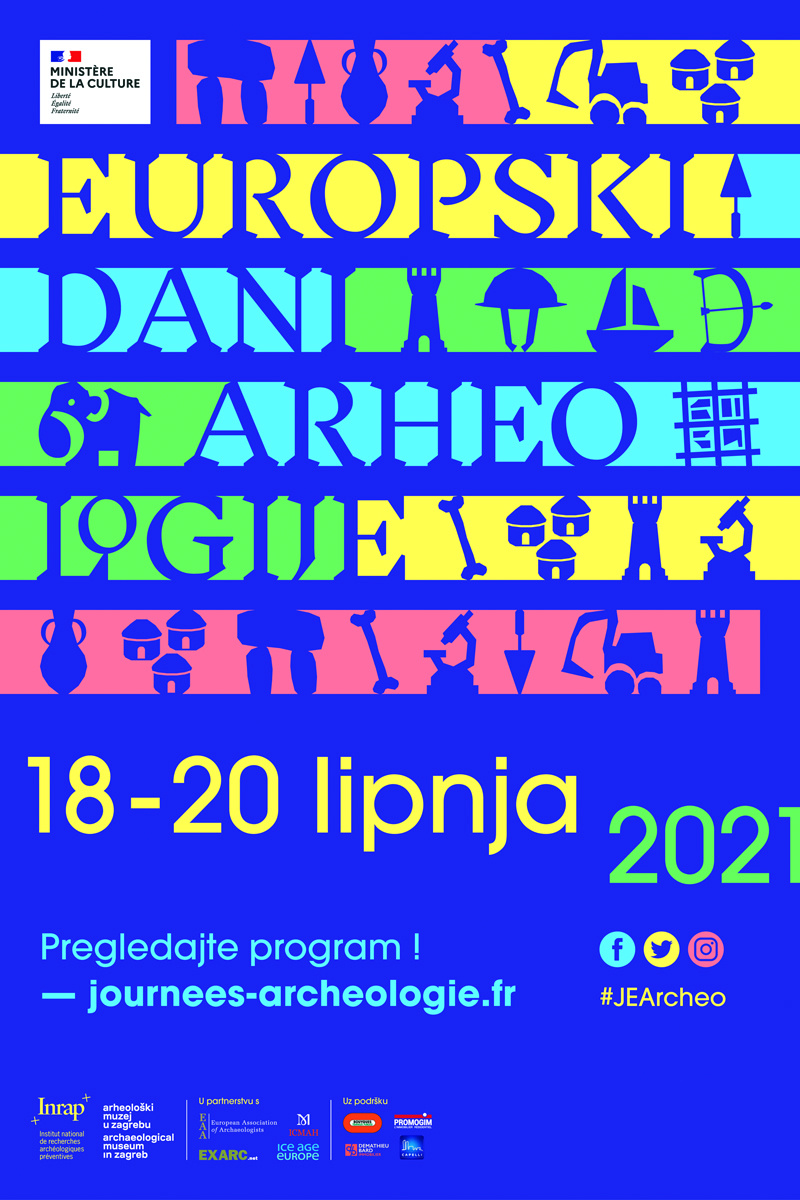